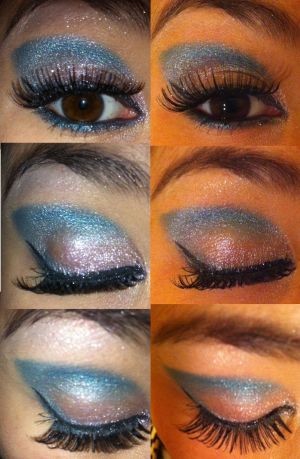 As this eye make-up was requested by the lovely Eilidh, I am naming it Eye-lidh! She asked me to use the Urban Decay vice palettes colours Provocateur and Unhinged, which are quite contrasting. Provocateur is a very light pink, quite cold and extremely shimmery. Unhinged is a deep metallic teal, with enough green and blue in it.

This look was very easy to achieve! After priming, I applied the light pink all over the lid, until a little bit above the crease. Using the pencil brush, I drew above the crease with the teal shadow, creating the cat eye shape. I then blended upwards only using a blending brush. I then saturated the colour a bit more.

After that, I applied the liquid liner in a lovely metallic charcoal colour (very pretty – a shame it didn’t photograph very well), creating a flick and then added some light eyeshadow, pigment and crushed pigment on the brow bone, just below the brow arch. To finish off, I put fake lashes on.